I went for an under 17 football national tournament held in Pune, MIT college Gurkul from 26th-29th September 2019. The tournament consisted of all the Ib teams from all over India. The tournament provided great exposure to all the team players as it was a great opportunity for the players to compete with other teams and gain experience and show what we have practiced the entire year. It was a very challenging tournament as the whole team had to push themselves beyond their limits and make it up to the finals. Although we lost in the finals, we learned not to quit.

I wanted to play the ISSO for a long time as it gives a chance to get selected for the national team so it was a very difficult task to arrange the best team to give our best. The most difficult part of the tournament was, we lacked players and we didn’t have any substitutes in our team but with only 11 players we played with all our passion and hard will and made it up to the final.

We didn’t have enough players so we needed to work as a team and break past all the weaknesses that could harm the success. We collaborated and played our best, helping each other and improving the bonding of the team.

Moreover, I realized my mistakes and worked upon it as well so that it could benefit the team. I was committed and wanted to win the tournament as winning is something that I always aimed or aims for.

Finally, I developed a few learner profile characteristics like risk-taking, being balanced and teamwork. The outcome brought a smile on my face as we never gave up and whatever were the circumstances or the situation I fought hard with my team and did our best.

Playing a sport like Football needs teamwork, coordination, collaboration. working as a team very important for any winning in any team games so in the tournament rather than demotivating anyone we had to cheer everyone up and boost them with confidence to make them realize their weakness and work upon it in the next match and stand up stronger. 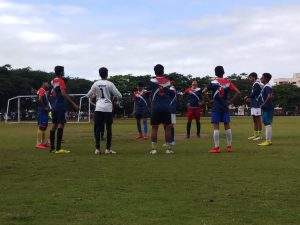