This year we held the responsibility of organizing the farewell for our seniors.The event had many parts, from the games to the food with additionally a band performance which I was a part of.

The challenges which we faced was delay in decision making as choosing a perfect song while keeping the main theme of the event was a difficult task as in some we could not sing or in some we could not play the instrument.More over it very much challenging for us to decide a meeting time for the band practice so we had to manage our studies with our performance practice.Additionally there were many places where the songs were been changed due to which we needed to prepare a whole new songs for the event.

As we all know that with disadvantages also come advantages.As was going to my drum classes it was easy for me to coordinate with the song and also helped me to develop my drum skills while working with a band.Further more I also developed my team building skills as there were few arguments between the team while making decisions which while time we short them out which also helped us to understand our team members perspective on a particular thought.

Last but not the least we all developed our patience as there were many problems while practicing the songs which we were only able to overcome by practicing a lot the same song so that we were sure of what and how we are going to perform our band performance for the Farewell :-_ 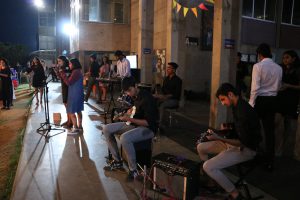