This activity included components creativity and service both. We as 11th graders were supposed to give a farewell to the 12th graders which included several performances and games amongst other things. During this process, I was the host of the event.Â  Being a host, I was supposed to write and deliver short speeches/fillers between every performance along with two other companions of mine.Â Â

My strengths during this process were that forming a script wasnâ€™t a very difficult task for me since I had done this sort of work before. Moreover, the stage time for the anchors was not very long so the writing part had to be less but the delivery was important. During practice, I could modulate my voice and make the delivery interesting. On the day, however, I did fumble a couple of times but was able to cover it up without letting the audience know.Â

The challenge mainly was to stay calm and to be ready to make adjustments and edits to the script. Throughout the process, the flow of the event kept changing due to external factors and we could do nothing but comply and make the edits. At times it was really frustrating writing the script over and over and over however I tried to remain as calm as possible and with the help of my friends was able to come up with an interesting script.Â

Moreover, since this was a collaborative effort, there were times when three of us werenâ€™t on the same page. Our wavelengths didnâ€™t match and it was difficult to come to a conclusion, but at the end of the day, we usually came up to a consensus and made it work.Â

I think this activity helped me sharpen my communication skills, writing skills and work on co-operation which will definitely help me while indulging in such activities in the future. 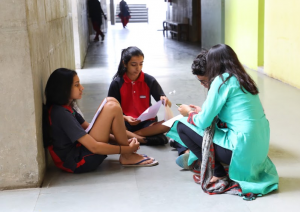