( LOs – Identify own strengths and develop areas for growth, Demonstrate that challenges have been undertaken, developing new skills in the process, Show commitment to and perseverance in CAS experiences )

My activity was learning drama for a year through a course offered by the trinity college London. I used to go to the class once a week, however, we were frequently given homework. We had different modules throughout the year, followed by an annual performance. The modules included stage manners and etiquette, knowledge of street plays, radio drama and importance of voice modulation among many other things. I also gave the official examination for the course and received a distinction.Â

Throughout the process, I identified several strength and weaknesses of my own. I realized that I found it easy to memorize drama excerpts, which was shocking for me because I always thought I didnâ€™t have a good memory. My weakness was that my throw of voice was not always very powerful. Though, once this had been pointed out to me, I tried to improve and pay attention to the remarks being made.Â  It took a long time for me to understand that instead of increasing my volume I has to emphasise on my tone which was supposed to differ from text to text. Although once I had improved, it felt good to have learned something new and to have done something so productive with my time. Especially because this is a part of communication skills, something thatâ€™d help me throughout my life express myself confidently and effectively.Â Â Â

Another challenge I faced was being committed to the task, as I mentioned we used to receive work every class and sometimes it used to be as rigorous as making a vlog and it was difficult to devote so much time to an extra-curricular when there were so many assignments and tests going on in the school. Even though I wasnâ€™t very punctual and would tend to procrastinate, most of the times I would complete my work because I found it so interesting. However, the most difficult time for me was the examination period because I had my school exams and SATs both, at the same time, and my parents kept telling me to give the other things more importance while not undermining the exam entirely. During this time management was hard and I didnâ€™t get a lot of time to prepare for my trinity exam, till the last few days there was a lot of chaos and if I could give the exam again I think I would do much better.Â 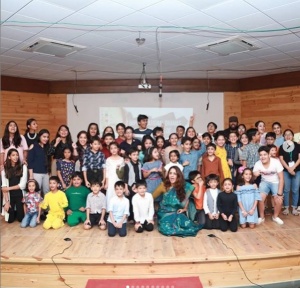