I volunteered to take part in â€˜Seva Cafeâ€™ at an event in our school called â€˜Monsoon Musingsâ€™. Our main motive of this event was to provide a platform for students and teachers to come up and share their poetry and write-ups as well as raise donations that were later handed over to organizations. I was part of a group which had to make food which would be sold to everyone attending the event. I covered lo 1,2,6Â

Lo 1:-Â  Over the course of the event i realised that I was too impatient at things. I would start cutting vegetables too quickly and they would be cut too big than needed. I realised that this i a area of development I had which I needed to work on.

Lo 2:- One of our group members who was supposed to bring nachos was not able to come due to an incident in his family. So we thought about what to do as without nachos we couldn’t use the dip which would go to waste and as our school was near a rural area there were no shops which sold nachos. So we decided on an alternative and bought chips as a substitute to the nachos. This helped develop our problem solving skills.

Lo 7:-Â  When we were organising this event we decided to donate all the revenue we would make from this to a charity. So we had to ensure that all the money made from this event would go to charity and that nobody would keep money from themselves. 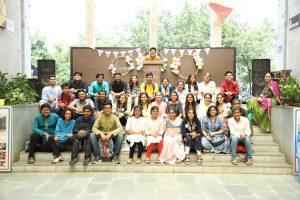