I took part in the community service opportunity provided by the school. We could teach them multiple things such as sports, art & crafts or ICT. I decided to teach the frisbee as I felt that that was the only thing I was skilled enough in to teach someone else. I achieved lo 2 ,4 and 5 in this task.

Lo 2:- I found it very hard to teach these kids frisbee as none of them had ever played it before. I also faced difficulty in communicating with them as they spoke gujrati which i was not very fluent in. I had to overcome this challenge by asking my group members help from time to time to translate for me. I also had to take help from more experienced players on teaching methods in order to teach the kids how to play frisbee from scratch.

Lo 4:- These sessions take place over 3 consecutive weekends which proved to be a hassle as i was not able to take a break during the weekend. It also interfered with the work I had to do from home. There were instances in which i felt too lazy to attend but I pushed myself to attend each day as every day I could teach those kids something new.Â

Lo 5:- For this task we had to work in a group. This was a difficult task for me as i don’t do well as a team player and prefer to do things alone but when i was faced with difficulties such as not being able to understand the kids as i was not fluent in gujrati or had trouble deciding on how to teach the kids, my teammates helped me and i learned how to communicate and collaborate with them. 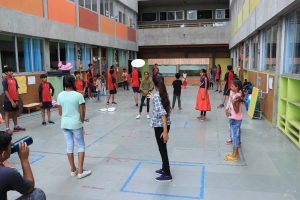