As a part of AS in school, I enrolled in dance activity with a class once every week. I learned different forms such as hip-hop and bhangra. Apart from this, I was also a part of a flash- mob in the Garba Fest and Farewell in school which allowed me to demonstrate my dancing skills in front of an audience.

This was my first time dancing, so it was difficult to learn all the steps. I would forget the steps and it was a reason to worry. I identified this weakness and made sure I focused more during practice in order to remember the steps. Being an avid hip-hop music fan, it was easier for me to pick up this dance style better than Jive and Bhangra. Through this experience, I was able to learn these new dance forms.

My strength was having a lot of stamina. It was essential that I identified my strength and used it to my benefit by practicing for longer hours and perform well in the Garba Fest and the Farewell.Â

I had very little experience of performing in front of an audience which induced a lot of stage fear in me. I was nervous and so performing was a huge challenge for me. But participating in the Garba Fest and the Farewell made me more confident. It was also a challenge to learn some specific moves because I was not flexible enough. To overcome this, I practiced the same step multiple times. However, we sometimes changed the step to make it more doable.

For both farewell and Garba fest, I had to come to school early and use my free slots for practicing. With so many many assignments and tests, it was difficult to show commitment towards dance. However, I tried my best and attended most of the sessions.Â

We helped each other while learning the dance, for instance when someone could not do a step we remained calm and taught them the step properly instead of being frustrated. This helped motivate each other and build confidence. However, not everyone always worked together. A lot of participants used to miss early-in sessions which made it difficult to teach them as their partners were not available. There were also disagreements between group members regarding which steps and formations to choose. However, we tried to reduce it by keeping our differences aside as everyone wanted a successful outcome.

This experience has taught me that even though trying new activities is challenging, it can teach us new skills such as teamwork and commitment.Â 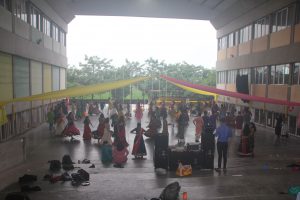