Basketball ISSO National Games 2019 conducted at MIT Gurukul Vishwashanti IB world school pune wherein basketball teams from around the country came to participate. We were exposed to very heighted and experienced players before whom we had no chance to win but give tough competition. A basketball team consists of 12 players, 5 who play in and 7 substitutes, where as our team consisted of only 6 players which led to less substitutes and another challenge. We played 3 matches in which we were successful in giving tough competition to all teams.Â

This tournament gave us exposure to new game techniques and helped us develop our game sense. Even Though we did not qualify these three days of competition 26th september to 28th september where very crucial in making us realise our weaknesses and strengths.Â

We demonstrated LO1: Identify own strengths and develop areas for growth

One weakness that I identified during the tournaments were that I wasn’t driving in while we were attacking.

From the next games I started driving in which fetched us many points.

We demonstrated LO2: Demonstrate that challenges have been undertaken, developing new skills in the process

The teams we were competing against were very experienced and heighted which was a challenge for us because they could easily stop our shoots and long passes. So we started giving short passes and shooting from far so that they could not stop our passes and shoots.

We demonstrated LO5: Demonstrate the skills and recognize the benefits of working collaboratively

In our team there were people of different experiences so they were always expecting more from someone less experienced so at first coordinating was difficult but as we moved ahead in the tournament we coordination got better and effective, which led to more effective attacks and defense. 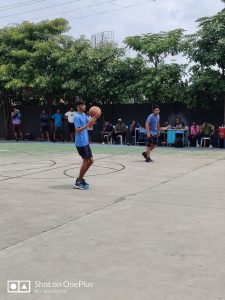