Model United Nations have always been an interest factor for me since the time I was introduced to it. I took part in the same several times in order to gain experience and as an extra-curricular since Grade 8. Thus, this year, a few of my colleagues and I planned of organizing a MUN of our own. We didn’t see a better opportunity than carrying on our school MUN legacy and planned on organizing the same this year by ourselves. I was the Under-Secretary-General of the FSMUN 6.0.

There were several learning outcomes that were involved in this specific activity since MUN helps an individual grow holistically. A few of those learnings were as follows:

LO1: During the process of the work, I identified how I can be a good leader and guide people well. I also learned how I can work under someone, efficiently, within deadlines and in pressure. However, the weaknesses that I discovered were my habit of procrastinating work and there were a few places where I could be more careful about while working. It was necessary for me to know my strengths and weakness in order to know what are the parts of me that I can use and embrace, and others that I need to work upon.

LO2: This entire student-led event wasn’t a very easy task since for any of us since we all had to work day and night to make a huge event like this successful. Moreover, nothing similar to this was ever done before, which led me to experience several issues for the very first time. One of the issues was looking for delegates since not many people get interested in events like these. However, it helped me polish my skills in dealing with different types of people and my persuasive skills. Henceforth, these challenges taught a lot of things to me.

LO3: I am usually an organized person when it comes to my work, however, this event had several aspects to it and all of them were working simultaneously, thus it became a little difficult to keep all of them in check. Moreover, there were many last-minute works that were pending and had to be done in urgency. At those times, the planning might go as per thought, however, it taught a lot like keeping small things in mind as well while such big events, etc.

LO5: As previously mentioned, this was a collaborative thought by my colleagues and me, we all had to work together in order to make this event a success. Since we all knew each others working styles and mindset, it was easy in the beginning to get along and begin to work, however, later problems like delegating work, a few conflicts between each other, became a tedious task. However, a good leader always makes an event successful and so did we and the authority above us. Even after problems faced while working in a team, at the end of the day, we were all satisfied with the work we had done.

LO6: An MUN is an event, in a way that is meant to spread awareness about several global problems and analyze them while searching for good solutions. Thus, several issues like human rights, border disputes, cultural issues were spoken about in this event which helped us improve on our as well as the delegates’ personal growth. Spreading such awareness helps the global society to get good, responsible citizens who make thoughtful decisions for the evolving world.

Henceforth, this event led us to be a thinker, risk-taker, a communicator and lastly a responsible person who can be relied upon. This event has helped me evolved as a person and also assisted me to identify my strengths and weaknesses. This event has encouraged more critical thinking within me and has given me several experiences at this age itself. Thus this event will be an important learning for me always. 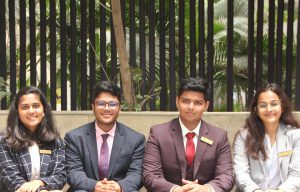 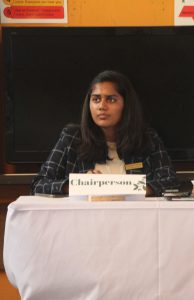