My friend and I edited a few stories of the Aesop’s fables and recorded them. We read the stories and decided on a few and planned to make them stories about young children at school. We recorded the stories and edited them. We then contacted several blind schools to ask if we could send the stories to them for their students. Unfortunately, due to COVID-19, most of the schools were closed and the students did not have access to the internet. However, 1 school gave a positive response and we shared our edited stories with them. The LO’s achieved through this activity are: 3, 5, and 7.

LO3: I am usually not an organised person, however, as I did this activity with my friend, that helped me stay organised as we worked together. We planned everything and set deadlines for our tasks, which helped us keep track of them as well as to complete everything in time. I think it is important to plan activities to be able to properly execute them, as it helps if everything is preplanned.

LO5: I worked with my friend, so it was easy for me to communicate as well as work together with her. It helped to work in a pair as we could both divide the work as per our abilities, which made the outcome better. We could also solve problems better because both of us gave different suggestions and we were able to find a good solution together. It is important to work collaboratively as many of the things in school as well as daily life require some kind of collaboration with people.

LO7: The ethics considered in this were academic honesty. While choosing what we wanted to record, we decided on Aesop’s fables as they are not copyrighted, and we also mentioned our sources and the app we used for editing the audio.

The highlight of this activity was making the stories, as I had a lot of fun in changing the fables and their messages to fit in a setting of a modern school. I think this was a pretty successful experience as we recorded the stories and were able to send them to at least one school. 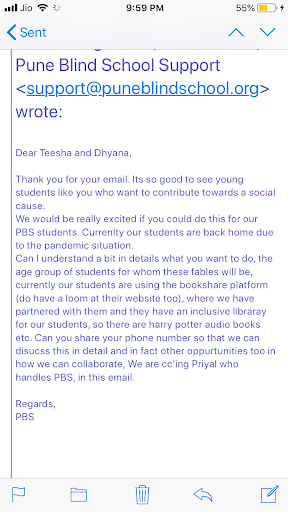