Missing girls is a public awareness campaign which aims to sensitize the populace to the plight of millions of little girls who are trafficked for sex exploitation. Missing girls was launched at the India Art Fair 2014 to give voice to those thousands of girls who get lost into the black hole of trafficking. There are more than 3 million prostituted women in India, out of which 1.2 million are young girls. The average age of recruitment of girls into prostitution is between 9 and 12 years of age.

Throughout the course of this event, I accomplished LO2,Â  LO3, LO5, LO6, LO7

For this experience we did various things such as playing a mobile game which was about a girl who was kidnapped and made a sex slave and later she saw a phone number in a missing girls shilloute and escaped. After the game we Designed a poster for Missing on the importance of awareness against trafficking and posted them on social media. Then we conducted a trafficking awareness session in a SMC school, this was the most tricky part, we had to make a presentation with less content and make the session very interactive and on a very basic level because the students with whom we were going to take the present were in 6th grade which makes them the best people to talk to about this topic as they could be targeted easily. As they were 6th graders and in a Gujarati medium school it became hard to speak most works in Gujarati and make them understand in a different language, knowing this we were prepared with the presentation mostly in Gujarati. The second major challenge that we faced was that the children were small unknown to most of the things we were going to talk about so we had to take the level of presentation to a very low level and even after that it was pretty hard to make them understand it. Moreover, it was very important that we had kept the presentation very interactive and had activities in them because we wanted them to make most of it from the presentation and not just doze off. After the presentation we made a stencil of missing girls outside the SMC school.

During this experience we made the 6th graders understand the significance of this global issue and that one wrong step could lead to something so bad that it ruins your life. We had to be very careful of our word choice because heavy words could lead to confusion or scare them so we had to use simple words in order to make them understand for example, for sexual abuse we just used â€œbad touchâ€.

Overall this experience was very helpful for us as well as the 6th graders because we all gained a lot of knowledge. This was the first time I took a session with small kids who were not very familiar with English which taught me how to present in future and be more ready with the presentation not only content wise but according to background of your audience. 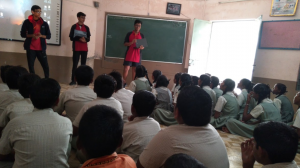 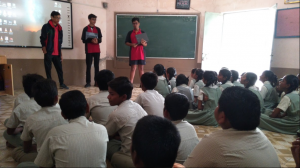