Basketball has always been an area of interest but have never been able to focus fully on it. The core component of IB – CAS gave me an opportunity to create new goals and concentrate on studies as well as sports. The classes helped me increase my stamina, my fitness and also learn teamwork and coordination while playing as a team. It also helped me achieve my goal of playing national level tournament. Through the classes, I was able to achieve learning outcomes 1, 2, 4, 5, and 7.

LO1 – After regularly going to the class, I could dig deeper and become more self-aware. I got to know my various strengths as well as weakness, I also got the determination and way to work on my weaknesses. The strengths I realized were that my offence was really nice, I had sharp shooting skills and ball control. I could pass the ball across the court easily and also understand the game psychology. Moving on, the weaknesses I found out was that I was poor at defensive skills. I felt that I could not keep the proper posture which was expected while defending. I also realized that I was short-tempered during matches. Being aware of these weaknesses also helped me in my daily life holistically other than basketball. Trying to overcome my temper issues helped me build better bond with my team members as well as build better relations with people I talk to in my daily life.

LO2 – Few most challenging things I faced was persistence and time management. With the increased workout, my body could not support me and hence, going daily for the classes was very difficult for me. I had to push myself and make my body adapt the increased fitness. Moreover, time management was also a problem for me as there was increased workload as well as I had taken up a lot of co-curriculum activities which made it difficult for me to give enough time for the basketball class regularly. To overcome the challenge, I made it a habit to wake up at 5 a.m so that I can catch up on the studies as well as attend all other extra classes too.

LO4 – Going for basketball training required some commitment as we were supposed to stay in touch with the ball daily in order to improve the skills. Therefore, I attended all my classes regularly even when I was lazy, tired or had some other pending school work. At home, I woke up early for doing enduring exercises which would boost my stamina to help me play more efficiently in the game. I realized that I have grown into someone very different after this activity. Now I know that I can effectively manage my time and take up different activities in my life without worrying about not meeting the deadlines.I feel that this is a reward behind all my sweat and time.

LO5 – Basketball being a team sport required a lot of trust, coordination and unity. Being a member of the team, it was very crucial for me to accept everyone’s strengths as well as weaknesses. In nationals, it was more difficult for me to understand other players games as everyone was from different schools and we didn’t have enough time to know each other’s game. There was a girl in my nationals team who was very arrogant and rude. She shouted unnecessarily on the team members. To deal with her, I talked to her privately and asked her what issues she faced and why did she shouted on us. After talking with her, I understood that as she had a lot of pressure from her coach to perform well and hence, she could not accept people making mistakes in the team as one mistake by one player costed the team a lot. Through this, she also understood the impact she had on us and we also understood why she behaved the way she behaved and hence we could work together in a better way.

LO7 -Â During the nationals, there were many players who deliberately pushed good players from opponent teams to have better chances at winning. Though, fowls were given but that didn’t hamper their game to that extent. Winning at the cost of injury and hurting someone else is very unjust as per me and I could never do that. I implemented all these ethics while playing all my matches and it made me feel content happy that I could perform well without cheating.

The final takeaway from this CAS activity is that in order to achieve any goal, one needs to be persistent and determined to do whatever it takes to reach near towards the goal. There are inevitable challenges were you need to show strength and overcome those to fulfill your dream. Also, there are instances were playing unethically could lead to victory, however, that path should not be chosen no matter what, that is what will make you a better sportsman as well as a better person. 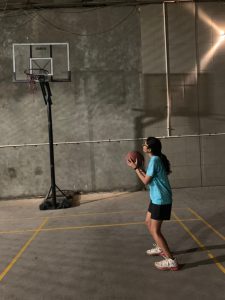 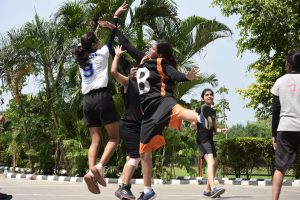 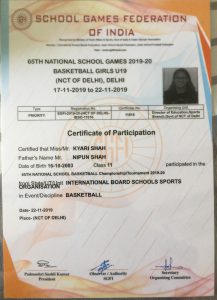 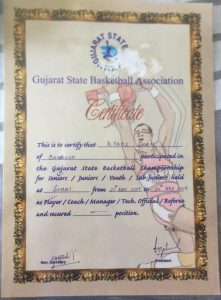