I went to an under 17 football tournament held in Essar school which was a district-level competition. The tournament consisted of all the teams from Surat rural. The tournament provided great exposure to all the team players as it was a great opportunity for the players to compete with other teams and gain experience and showcase our learnings from an entire year. It was a very challenging tournament as the whole team had to push themselves beyond their limits to win the tournament. In the end, we won and then, later on, played at the state level as well. The learning outcomes I achieved were LO 1, LO 4 and LO 5.

LO 1-Identify own strengths and develop areas for growth

Talking about my strengths, I am a really good team player as I know that a team sport cannot be played alone. I have good physical skills as I have been playing this sport for years and I have been a good footballer. My weaknesses are that I cannot play every position as great as I play defense. I lack certain skills that have a loss on the team. I have been training hard to become a better technical and tactical player.

LO4-Show commitment to and perseverance in CAS experiences

Commitment has never been an issue when it comes to football as I have a passion for this sport and I would never quit playing football. This mentality and love for the sport have helped me stay committed and never quit.

Football is a team sport and to win you need to work together as a team. Here cooperation skills are key as if you cooperate with each other it motivates others to do the same which increases the productivity of the team. In a team sport, every player is important if everyone doesn’t play together then there is no way to become better. Team synergy is key as it divides load among players during matches which are very important.

To conclude, the Subroto cup has been a great experience for me to become a better player and a better person as a whole which will be very helpful for me in the future. 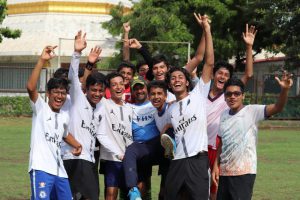