Monsoon Musings was a literary event organized mainly to provide a platform for writers of all ages to recite and share their writings with others. This event also consisted of ‘Seva Cafe’ wherein we serve food to customers and they could pay us the amount that felt right to them. The purpose of Seva Cafe was to raise funds for NGO’s (Missing Girls and Friends with Tails). I was the Event Co-ordinator for this project and got to develop LO1, LO2, LO3, LO4, LO5, LO6, and LO7.

Through this experience, I was able to identify my strengths and weaknesses. Since this was the first event I organized with a major position, this event really helped me in identifying how efficient I was in leading an event. I observed that one of my strengths were staying organized throughout the process of organizing, coming up with solutions for last-minute problems, being creative in terms of coming up with ideas to make the event better, and taking initiative. Although, I realized I need to be less stubborn about getting everything done my way and need to be more open towards ideas from others. I do now, admit that if I had been more receptive to others’ ideas, this event could have been more successful.

There were many obstacles that were faced reaching the success of the event. One of the major problems was getting people to participate in this event. This was because most of the writers had stage fright and were too shy to come and share their work with others. However, we overcame that by doing effective marketing and trying our hardest to convince people that this event was a judgment-free zone and this is an opportunity for them to conquer their fears. We also faced challenges on the day of the event when some of the Seva Cafe volunteers weren’t co-operating and were constantly fooling around. In order to overcome that problem, we divided the volunteers into groups so that everyone got to do what they were best at. The ones who were causing the most chaos were asked to sit in the audience during the event to avoid disturbance to the flow of the event. Another problem we faced was putting together all of the decorations on the venue on the day of the event due to the lack of time available. We only had about an hour to put up all of the decor and make all the food for Seva cafe prepared which was very less time. To overcome this, we used the help of many of the Seva Cafe members who were really supportive of this.

To initiate this CAS experience, we as a team of coordinators made an agenda for all of our tasks. I am not usually an organized person so it was tough for me to adjust to this process but gradually, I got used to it and found this method to be really efficient to use in my daily life to help deal with procrastination. In the initiating stages, some things took more time than we anticipated, for example, getting teacups and trays for serving or placing the cloth we used for decorations. However, now that I know how timeline strategy works, in the future, I will be able to prevent this from happening again.

There were multiple times when our tasks got really frustrating, such as making posters over and over, deciding on menus, etc and it was really had to remain perseverant through times like these. However, we as a team really helped each other and did not limit our duties to the roles we were assigned.

Furthermore, by donating the funds we raised from the Seva Cafe (Rs. 8356), we contributed to the issues of global significance. 3000 rupees out of this were donated to the NGO Friends with Tails which vaccinates the street dogs of Surat to prevent them from diseases. The remaining amount was donated to Missing Girls, which is an anti-trafficking campaign. Helping these causes makes all of my efforts feel worth it and makes me feel proud of myself.

There were some ethical issues involved in this event. During Seva cafe, volunteers ran out of some of their ingredients that were essential for some of the recipes. Because of this, we made a mistake and decided to use ingredients from the school refrigerator with teachers’ permission. We realized our mistake and as a consequence, had to write an apology letter to the school and replace the ingredients we used.

I learned a lot during this CAS experience. Particularly I developed some learner profile characteristics like being a Communicator, an Open-minded person, a Thinker, and I reflected upon on actions. The highlight of this event for me was the day of the event itself. Watching how all of the weeks of planning turned out really, showed that our hard work paid off. 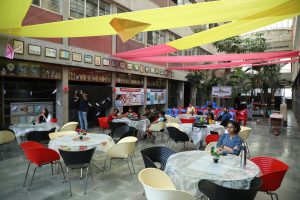