My first CAS experience was community service which was held in our school (Fountainhead school). Students of government school had attended this session, which was held every weekend for 1 and a half months. Out of all the options I selected to teach football to them, as that is something I am passionate about. Community service provided them with the opportunity to get exposure to different activities which they don’t usually get in government schools. I was really skeptical at the beginning, coming early every weekend but at the end it was worth it. I achieved LO1, LO2, ,LO3, LO4,Â  LO5

During the first service session, there were a lot of problems as there were about 50 children who wanted to learn football and only 12 volunteers were there. This caused a lot of problems and we could not deliver our content fruitfully. The major problem was that the kids only knew how to speak Gujarati and from 12 volunteers there were only 4 people who knows gujrati so we had divided the group into 4 in which there can be at least 4 gujrati speaker. Thus, I took the initiative and decided to lead the session. I used my communication skills very well. I have never possessed much leadership skills, however, circumstances led me to lead and identify my skills.

As this is my first service session, I was a bit nervous asÂ  there were many underprivileged students in football and every Saturday and Sunday there were a lot of new people comingÂ  to football. As there were many people like 30-35 people in football and we were 6-7 people to handle them so it was a bit hard to handle them and also speaking in their mother tongue was difficult to manage them.So we were not able to handle them properly and to teach them from the beginning.Â  So from that day we started listing the activity and made a plan and a strategy how to conduct the session fruitfully. And as per the plan the session were going smoothly and were going according to the plan.Â

Also, coming early every Saturday and Sunday was a huge task and commitment to make because I had to spend hours teaching instead of completing my own school work. And also stay calm while teaching them as they were irritating very much ,so that makes me commit and at the end of the session, it made me feel proud.Â

Working collaboratively was very beneficial to us while conducting service sessions. We used to have large groups of students and less volunteers, and while teaching we had to make sure every student is participating equally,and also they don’t get hurt by themselves. We decided to split up into 4 groups and divide students into 4 groups and work with them separately. I did find working with some of my co-volunteers difficult as at time my volunteer were spending time playing themselves at the cornerÂ  and not cooperating well with me. Then we had a great and successful service session with these students.

In conclusion, i had gone through many learner-profileÂ  which makes me a good leader.. Thinker as i was making plan activity and how to teach them well properly with the help of volunteers. Communicator as i was able to communicate with them in their language and making them understand well directly. Caring as we were explaining them the fouls and what not to do while playing football which can hurt them. Had a great time spending time with them. 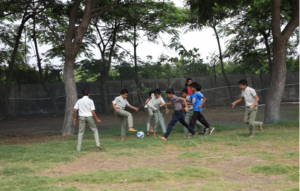 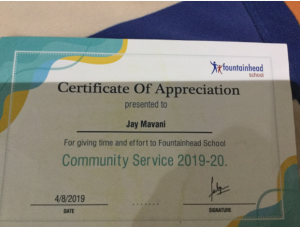