I Went to a Football State Competition held in Jamanager from 18 August to 21 August in which many teams were selected from across Gujarat. Being in my first State Competition, It was great exposure for me to experience real challenges faced by the players during the matches. This was a unique experience for my team and especially me as we had never confronted that difficulty level and we needed to challenge ourselves and push past the breaking points beyond the limits and advance towards the finals of the competition where we, unfortunately, lost the semi-final.

Playing football as a sport for many years, I always wanted to be a part of the State Competition and prove myself the self-worthiness. The hard work and time assigned to this activity resulted in my football skills such as dribbling, passing, shooting to improve with a significant improvement in stamina and fitness. This competition gave me a chance to learn new things about the sport and develop my skills which might help me in the future too. From this competition, I have discovered my strengths and weaknesses also.Â

This CAS experience involved Activity as the CAS component in which Learning Outcomes I demonstrated were LO-1, LO-2, LO – 4, LO- 5.

LO-1: Identify own strengths and develop areas for growth

Knowing my own strengths and weaknesses related to particular sports helps me understand the mistakes I make and analyze myself in such a way that helps me improve my skills and decrease the mistakes. During the competition, we as a team and with the help of our coach â€œAnwar Sirâ€™sâ€, identified our own strengths and weaknesses. Weaknesses like I am not that good at dribbling that’s why a preferred position for me to play in the game is center-back where I had to stop the rival players from scoring. This helped us as an overall team to make fewer mistakes and drive towards the semi-finals smoothly. Figuring out our mistakes and trying to correct them also resulted in our team’s self-confidence to rise which is very essential as it makes players play fearlessly. The preparation and rigorous training helped our team players to enhance and build coordination and communication while the game with the other players and stick to their position during the match which at the end was found very beneficial for us at the state competition. One of the strengths of me in sports Soccer is that I am very attentive and donâ€™t give up easily during the game which caused some potential rival goals to be saved in the competition.

LO-2: Demonstrate that challenges have been undertaken, developing new skills in the process

Undertaking new challenges is very important as it helps a person throughout his/her life to grow and get better every day. During this competition, we as a team had also undertaken many challenges that were tough to tackle but ultimately we did it. Challenges like,Â as the competition was Under 17 and teams came from across Gujarat, professional club teams like SAG whose players trained football most of their year had registered and participated in the competition. Because of their full-year rigorous training, their players had much greater stamina and power which was the key reason for their winning in the semi-finals. But, with our great coordination during the match, we gave a great fight which resulted in the match to end with a very close difference. Further, most of the players were new to each other and didn’t have that o coordination due to which keeping the game on our side was found to be difficult. There weren’t many players like me who were playing the state competition for the first time but then also settling yourself in the new area and getting comfortable with the team was kind of tough for me. Irrespective of the challenges that we had undertaken, being a part of Fountainhead Football Team A and playing in the state competition till semi-finals was a great moment for me where I learned many new things like strategies or skills which helped me improve my overall game in football. Through this Competition, we have developed a great chain of coordination between players and build a common understanding during the match.Â

It is easy for me to be committed to anything that I enjoy doing. And when it comes to sports football which I have been playing for 7 to 8 years, I can play it all day long without getting bored. Football has been my sport since I joined this school and now committing to it is easy for me because I enjoy playing it and it teaches me a lot of great things. Talking about the sport, Football is a team game which needs a high level of coordination and understanding in the players with a great level of concentration and determination to it. Our coach â€œAnwar Sirâ€ has always taught us that this sport is a game of mind and that’s why to be a great player in it you show more importantly requires discipline towards it. Being committed to the sport helps the person learn about the sport and enhance his/her skills more quickly. Further, Not only in-game but being committed teaches the person many important aspects of life which helps the person to have a happy and balanced life. According to me, for this CAS experience, there weren’t many difficulties while being committed towards it but some like before competition, the training increased was somewhat difficult and exhausting in the beginning but that also, in the end, was worth it.Â

LO- 5: Demonstrate the skills and recognize the benefits of working collaboratively

As said, Football is a team game and therefore teamwork and leadership are essential in this game for the players to win the matches. In this sport, working collaboratively and maintaining the synergy between the players is the most important aspect of winning the game and having perfect coordination and communication in the players. Playing in an under 17 competition with the team having players of my age and from my grade mostly, it wasn’t hard for me to build coordination with them and communicate with the players. Rather, players being my friend, learning from others,Â and keeping track of my mistakes had become comparatively easier. This same thing reflected in the State competition where coordination between my teammates and me was nice which saved potential goals. Working collaboratively made us all players as one to build our fitness for the competition and develop our own stamina to limits which were sufficient to play 90 minutes matches without any issue.

I have been playing football as a sport for more than 5 years and from that time I have always been taught that football is a sport that requires dedication and discipline. Our coach has always taught us that ethics and discipline are the 2 main factors in this sport. While we went to Jamanager for the Football State Competition, we observed an ethical issue in the competition. Irrespective of this competition being Under-16, many state official teams had above age players who had fake documents due to which actions weren’t taken against them. This issue in the end led us to lose in semi-finals and therefore lose the competition too. In Semi-Final, Gujarat nations club team known as SAG was against us which consisted of players with age 21. Due to this ethical issue, our team came up weak which led us to lose our chance of going to play Nationals. After losing the match against the team SAG, we as a team were very sad but were not disappointed by our match. We gave a strong fight to the other team till the end irrespective of them consisting of overage players. We had a great competition after all and had learned a lot and therefore were motivated to work hard to win the competition next time. Just before the match, we were told this news and we were a little demotivated by this as our chances of winning decreased heavily. According to me, due to the ease of making fake documents in India, this ethical issue remains. I think, a more strict system in these competitions needs to be established to decrease this kind of fraud in competition. 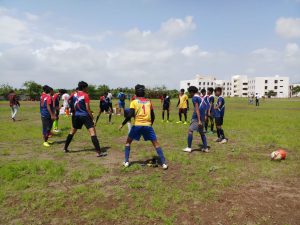 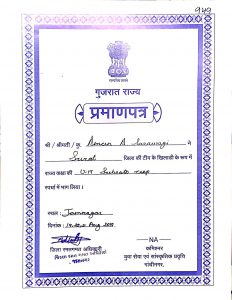