FSMUN is an educational simulation in which students can learn about diplomacy, international relations, and the United Nations. This event was organized by our school students on 24 July- 25 August which was open for students from anywhere. I participated in the organizing committee of this event in which I and other volunteers helped the school to organize this event. In the Organizing Committee, I was a part of the decoration team which managed to decorate each committee in the wing, opening ceremony hall, closing ceremony hall, and the party of the social.

Being my First time, this was a great experience which helped me learn many new things about managing an event and organizing it. It also accommodated me to discover my strengths and weaknesses while organizing the event. Throughout the preparation of this MUN, the learning outcomes that I achieved were 1, 2, 4 and, 5.

As told before, Discovering my strengths and weaknesses helped me work on it and improve my skills to become better. This also assisted other volunteers in the OC team to identify their weaknesses and probably improve their skills with my strengths helps. Getting to know my weaknesses was also great information that helped me find a solution for it and improve that for my betterment. The weakness that I realized I had was I wasnâ€™t good at decoration stuff but with time and other volunteers help, I got better at the stuff.

Furthermore, participating in this event for the first time, early in for this event in the school and the load of the preparation with studies became a tedious job to manage and complete properly in the assigned time. This challenge at starting was very frustrating for me due to lack of time management but over time, I was back on track and the preparation was going smoothly. Coming early for the event preparation was the aspect which was testing my commitment towards this event. According to my, I was well committed to the event and gave my best to organize the best MUN.

While organizing this event, I found that collaboratively working in a group was a strength of mine which had probably built over a period of time due to my sports which is soccer. This benefited my OC team, as the task given to us had completed fastly without any conflicts arising. Nonetheless, this teamwork resulted in a great decoration to be done which made the FSMUN shine more.

In conclusion, Participation in The FSMUN as an OC member was a great experience for me which assisted me to enhance many skills of mine and organize a great event on 24th and 25th August. 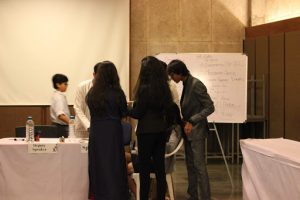 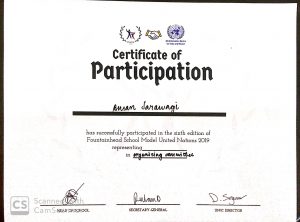