Football,Â the gorgeousÂ game,Â maybe aÂ sport I most like to play. It inculcates basic valuesÂ thatÂ makes a player learns hand in hand helps player toÂ enjoyÂ the game, through team-work, coordination, hard work, and a winning mentality. Football, for those notÂ aware ofÂ the game,Â is aÂ team sportÂ  betweenÂ twoÂ groupsÂ of 11Â playersÂ every. TheÂ aim ofÂ the sportÂ isÂ to undertakeÂ and scoreÂ within theÂ opposing teamâ€™s goalÂ whereasÂ at the same timeÂ defensiveÂ your own. It’sÂ easyÂ playing,Â alongsideÂ relativelyÂ few rules and itsÂ skillfulness. Football helps me to maintain my physical well-being and fitnessÂ

LO1-Identify own strengths and develop areas for growthÂ

.I play as a defender for my team but earlier I used to play as a goalkeeper and my job is to supply balls to the attackers, create chances and clear the ball from danger. My endurance was low hence initially wasn’t able to play the whole 60 mins match. However, after constant practice and support of my coach and teammates, I am able to play 60 mins match effectively. Also, ball controlling was the major issue that I faced during the initial stages however after hard work and dedication towards the sports I played regularly throughout the week and made my skills better. My strength was in clearing the ball which helped my team a lot as I was able to clear the ball far from the danger zone.

LO2- Demonstrate that challenges have been undertaken, developing new skills in the process.

There were many challenges which my team faced in the football competition. We faced some of the best teams in our state. We lost in the semifinals in Subroto State level competition, we lost finals in ISSO/IBSO and lastly, we lost in quarterfinals of KMK Zonals. It is really difficult to win against a competitive team like SAG (sports association of India). It requires a lot of dedication and practice. We did not had enough players to substitute but we give our best in all the tournaments however our strategies weren’t successful all the time.

LO4- Show commitment to and perseverance in CAS experiences

I currently playing football 3 times a week/Â  1.5 hours each time. I am following this schedule for over 3 months. ( However when there is competition approaching I play 5 times a week )

LO5- Demonstrate the skills and recognize the benefits of working collaboratively

As mentioned earlier football is a team sport, hence teamwork is the most essential for any football player. Our team use to always play together hence we use to give each other feedback on monthly bases. Once in a week my team and I use to meet and played a match so that our coordination and synchronization get better. Also at every mistake, I made my team-mates instead of shouting on me, they use to help me out so that I don’t repeat the same mistake.

In conclusion, I have applied various Learner Profiles such as communicators, risk-takers and balanced. Football benefits not just me but also my team who plays with me any time. I have succeeded in improving my skills and took back some life learning which will help me throughout my life at any point of time. 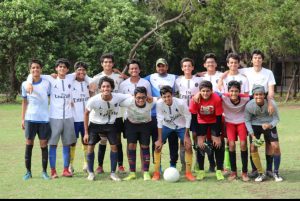 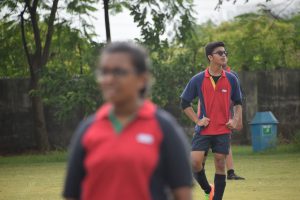